A Foyer of Distinction in Glencoe 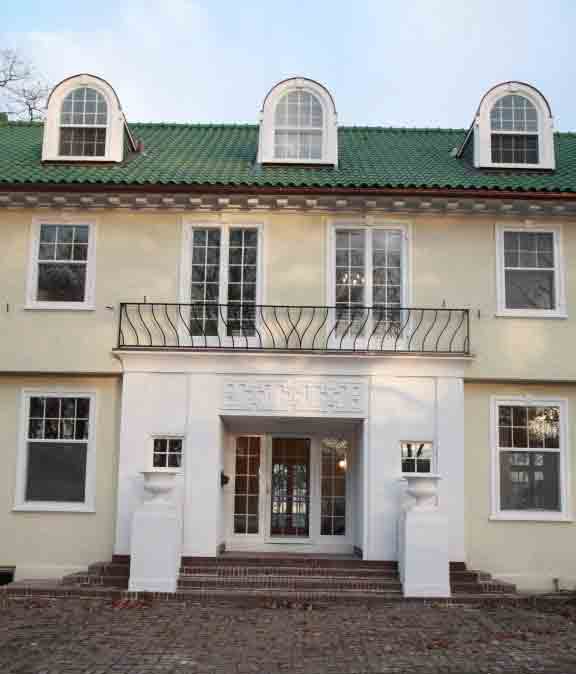 One can feel a lot of pressure, choosing colors for a formal foyer in a stately residence such as this. Add to that pressure the fact that the house was originally built by a prestigious architect–Howard van Doren Shaw–then renovated sixty years later by another, equally well-known architect–Samuel Marx–and you understand why the homeowner felt trepidation.

Some of Marx’s most noteworthy motifs embellish the walls and ceiling of this foyer, such as this floral wall sconce.

But this is just one of several floral motifs which seem to grow organically out of the plaster itself.

Here, for instance, is the intertwining leaf motif that runs around the perimeter of the room, forming an organic crown molding.

Several embedded floral motif sconces in the ceiling finish off this sculptural garden.

The client had done pretty well at choosing her own colors for many of the rooms.  But she called on our assistance for this foyer and the adjoining formal parlor/sunroom.

Our recommendations, which we then also rendered, were consistent with the subtlety of the motifs.  The whole room was to be painted the same off-white color–a color reminiscent of white marble.  To make each organic motif “pop” without loosing it’s seamless integration with the plaster walls and ceiling, we relied on differing levels of sheen–ranging from flat to semi-gloss–to accentuate the decorative motifs, moldings, and trim.

Prior to painting, though, we stripped the floral wall sconces to bare plaster, repaired them, and repainted.  (We did this, in part, because they needed repair. Also, though, we wanted to recover as much of the crisp profiles of the original renderings as possible.)  We also restored the decorative finishes on two tables.

Here is a list of services we provided for the restoration of this room:

We also provided color consultation and window restoration for the adjoining formal parlor/sunroom.  To read what the client thought of the restoration work we did, go here.