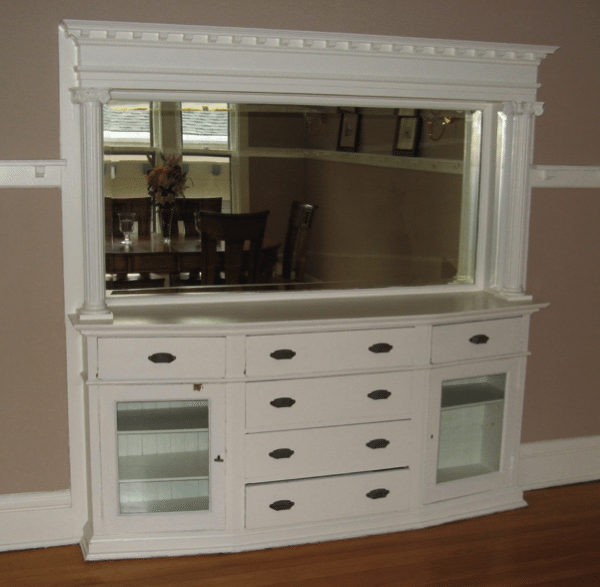 Even before we did a stitch of work on this 120-year-old cabinet, we knew from experience that what we were facing was an architectural gem.   It would have been made, we guessed, from a superior grade of oak.  And this wood had most likely been skillfully quartersawn so as to display a stunningly beautiful surface. The initial scope of the project, then—paint removal, revitalization of the natural patina, and saturation with varnish—was a wise investment of restoration dollars.

In fact, one wonders why anyone in their right mind would have painted this gem in the first place!  We get asked this question so often, we’ve even figured out a few reasons why we think wood elements such as this cabinet have been summarily reduced to wallflower status by having been slathered with thick layers of paint.

Not only would the process of paint removal recover a stunningly beautiful natural patina.  It would also restore the crisp profiles of the intricately figured moldings: the acanthus-leaf embellished corbels, the dental moldings, the egg-and-dart motif, and the fluted pillars with scroll-work capitals.

[By the way, do you know the symbolic meaning of the egg-and-dart motif?  Life (egg) and death (dart)! Makes perfect sense, once you recognize it. Have you got a carved pineapple somewhere on the front of your house? That means you’re hospitable people! There are more “stories” in houses than its number of stories.  And there’s even a story as to why floors of a building are referred to as such.  But let’s get back to the story we were telling…]

As this photo reveals, our intuition was right!  Beneath those many layers of paint lay this complex and vibrant, quartersawn oak surface with intricately detailed moldings. 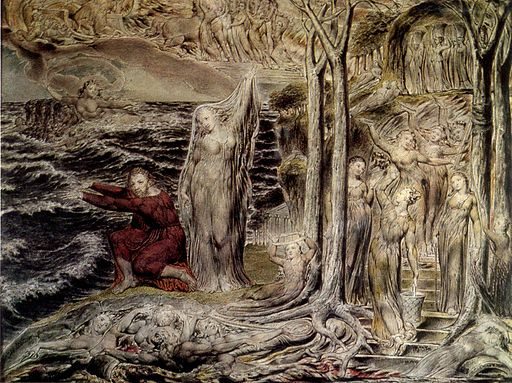 So lively is this wood that one can understand why the Greeks thought the majestic oak was inhabited by wood nymphs!

But we knew better than to celebrate too soon!  A bit of paint removal a restoration does not make!  As with the proverbial advice not to look under the hood of one’s car (because you’ll likely discover something’s amiss), it is dangerous to remove paint from architectural elements if you are not prepared to deal with what you find beneath the surface.

Just as we suspected, then, removing the paint from this cabinet revealed a handful of problems, both structural and aesthetic, that also required attention, including:

Let’s take a closer look at each of these repairs in turn. 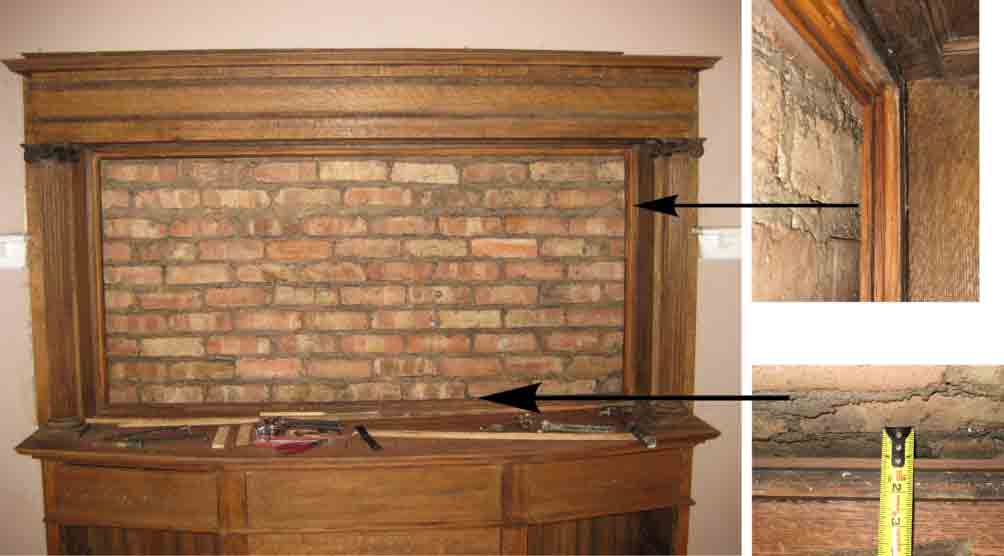 As the picture to the left displays, our solution started with pulling the framing back tight against the cabinet and securing it in place with finishing screws and adhesive. To keep the repaired frame snug against the cabinet, we then filled the gap between the mirror frame and wall with shim material.  (See this shim repair in the picture to the right.)One might think such a repair, while important, remains invisible.  But even invisible repairs such as this contribute to the sense of presence one experiences in a well-built piece of furniture. The piece has a stability that can be experienced, thus contributing to the overall integrity of the element. (Think, by contrast, of a person who has become “unhinged.” As with people, structural integrity in material objects is the ground for confidence.) 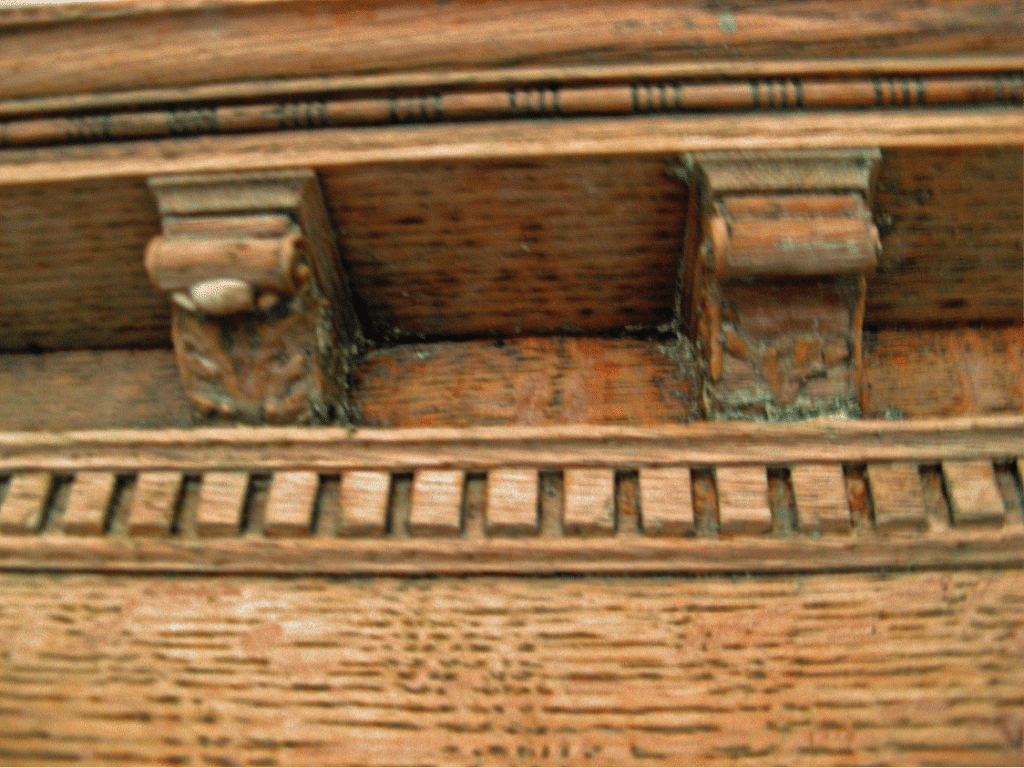 Another problem we encountered was degradation of the decorative acanthus leaf motifs fitted over the corbels that line the top of the cabinet and which contribute to the strong presence this piece makes when properly restored. As an enhancement for these corbels, acanthus leaves made from composition  had been applied to the scrollwork on the bottom edge of these brackets. Unfortunately, as the picture on the left demonstrates, nearly all of these acanthus leaf decorative moldings had degraded and/or were broken off. 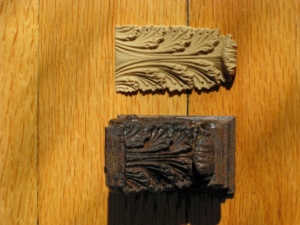 Here’s a sample of what the composition acanthus leaf looked like before and after it had been applied on the corbel, then stained to match the rest of the cabinet. 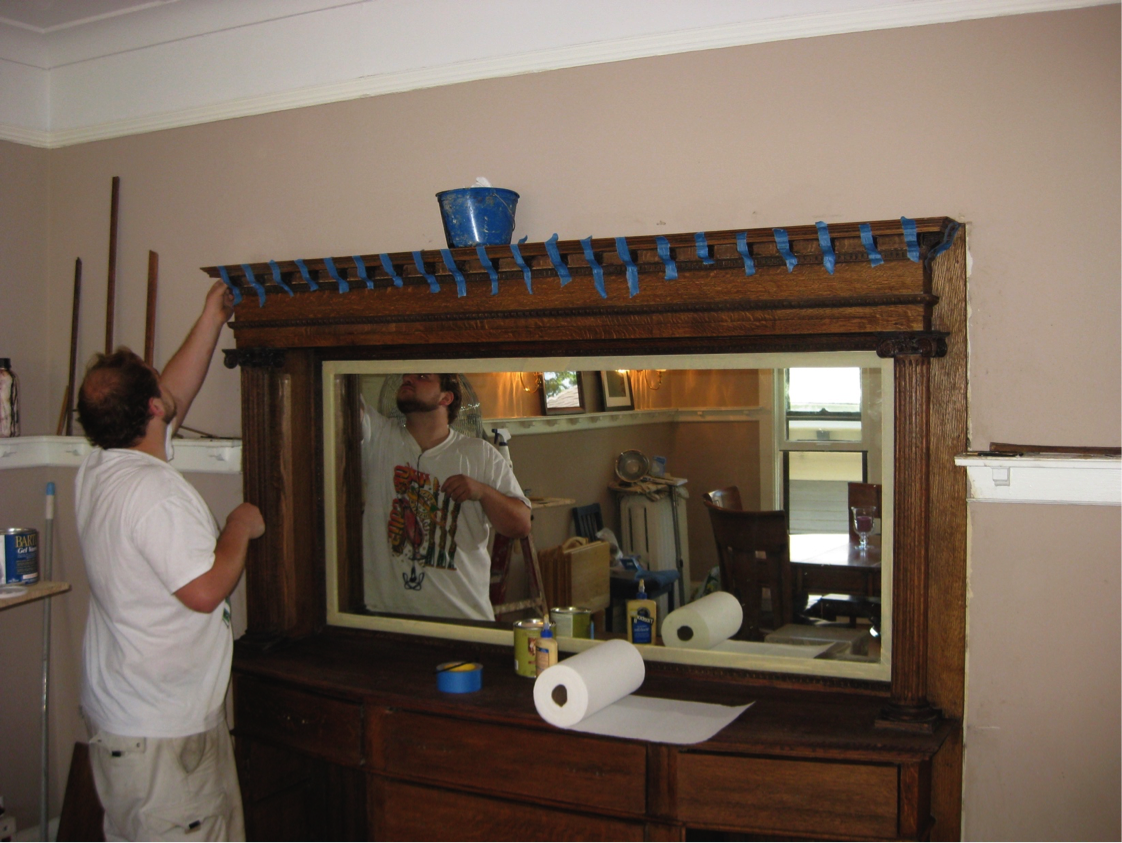 Twenty-plus corbels later, the cabinet is well on its way to recovering its dignity.  But there was still more work to do!

One of the beauties of wood, and a reason it has been favored as a material for building architectural elements for centuries past, is its malleability.

Here, for instance, is one of the scrollwork capitals on top one of two pillars on this cabinet. We’ve used tinted epoxy to repair this scroll, carving it to blend with the original profile.  We used a similar repair method to replace a few of the “teeth” that got knocked out of the dental moldings.  (Warning: do not use this method to replace human teeth!  Consult your dentist for oral hygiene, not your woodworker.)

Sometimes we have to replace whole items, like the acanthus leaves made from composition we replaced on the corbels, as described above. For less extensive repairs, we sometimes use tinted epoxies, such as in the repair this scrollwork.  As the example of a “wood inlay” on this page demonstrates, another method of repair involves replacing parts of an element with a spliced-in or inlayed piece of wood of the same species. This method is known as a scarf (or “dutchman’s”) repair. We also have repair kits of various materials we can use to fill small gouges and scratches in wood. Having a variety of materials to work with, and a bag of tricks to draw upon enables us to repair a lot of things most people think are beyond repair!

As might be expected of a 120-year-old cabinet  in a dining room, there had been a lot of abuse hidden beneath layers of paint—stains, mostly…but gouges and scratches as well. The countertop had suffered a lot of abuse, including proverbial and ubiquitous drinking glass rings (vodka martini?…rum and coke?). We repaired the gouges, rings, and scratches, bleached and neutralized the entire surface, and recolored the wood to make it blend with the patina on the rest of the cabinet.  Since it was the end of the day by then, we went to Jimmies (a legendary Hyde Park bar) for our own vodka martinis, leaving  our wet-ringed glasses on the countertop for someone else to worry about!

After all this careful attention to detail, I think most people would agree it would have been a mistake had we then wrapped this cabinet in plastic kitchen wrap!  But, in fact, something close to that kind of fiasco happens all the time when historic and vintage wood furnishings get finished with polyurethane, a form of PLASTIC coating!  Click here to learn about the importance of making period-sensitive choices of finishing materials when restoring historic and vintage architectural elements.

The paint on this cabinet robs it of its dignity.  It looks more like a wedding cake than a beautifully crafted built-in credenza.

But keep scrolling down to see what it looks like now! 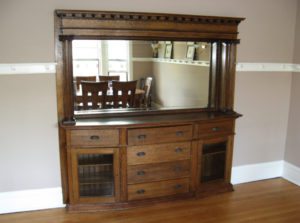 It’s hard to believe this is the same cabinet as in the picture below!

Fully restored, it stands tall now, having an architectural dignity that commands respect.