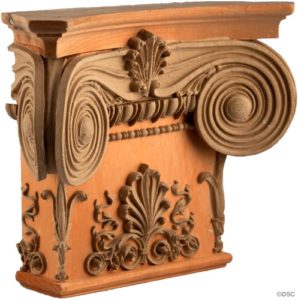 At the beginning of the Victorian Era, decorative embellishments were hand-carved. As time went by, though, hand-carving became exhorbitantly expensive.  The solution came in the form of hand-carved molds that were then filled with a clay formed from a mixture of sawdust and hide glue (called “composition” or “compo”) which could then be pressed into the mold and dried to produce multiple copies of “faux-carved” decorative objects that could then be affixed to the object as a substitute for a hand-carved item.  Replacing degraded moldings with new composition moldings, then, is consistent with period restorations.  Only if the original motif been hand-carved would it be necessary, to remain consistent with period restoration, to replace it with a hand-carved piece.